You are here: Home › One year since “the call”
By Cairs Solutions on July 29, 2016 in Happy Adoption Stories

An adoptive parent just emailed us this post from today. With her permission we are sharing it with you. 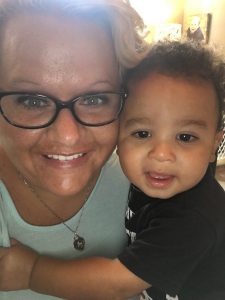 “I can only describe it as the equivalent of having a doctor say “you’re pregnant”. That confirmation that this is happening. I had spent a few months taking classes and preparing for a baby.

I initially had a call when I had only been active for 17 days (May). The expectant mother picked me and changed her mind within a few hours. It was a huge blow but it led me to the real call. I had stayed home the day before cutting tags and prepping the nursery for whatever baby may eventually come my way.

I went to work at the YMCA that day like every other summer day. My coworkers asked about the adoption process and about the nursery. I explained that I always have my phone on and that I am literally just waiting for a call.

The subject was changed and I was making newsletters on my laptop. My phone vibrated and I looked down. I had to look twice because it said “Grant Kirsh”. Grant was my adoption attorney and I thought okay… There are lots of reasons why he could call. I got up, walked out of the building, and answered the phone.

Grant asked how I was to which I replied… I’m good… He then said, “are you still interested in being a Mom?” I said, “yes”. He said, “well you’ve been chosen.” I don’t remember a whole lot after that. He told me about the expectant mother and I told him about how I just finished the nursery and cut the tags off the car seat the day before. He was excited that I was excited and he couldn’t wait to tell the expectant mother how happy I was. He couldn’t remember the gender and promised to message me. He said he would call the expectant mother and tell her my response. He quickly talked with her and let me know that as of that moment we were a go.. He then messaged me “it’s a boy”.

I had to let that sink in. I was going to have a son. O.M.G. I called my parents and my sisters and messaged my best friend. I then ran through the YMCA shouting that I was going to have a SON! Oh and the best part.. She was due August 10th but may be induced. I went home and bought diapers, wipes, and a few other essentials. I don’t think I slept at all.

I was insanely happy and so scared. She would have every right to change her mind. She could decide to raise her child, pick someone else… It could all be over. I didn’t make a social media announcement or ask for prayers. I went silent on social media. I told the people who needed to know and that was it. I made it through the rest of the work week somehow. I got updated about any progress. I also learned all about the expectant mother. In my eyes she is an angel. I will never be able to thank her enough for the blessing that she was about to give to me. I was so proud to know of the sacrifice that she was making for her son.

I also had to think about school. My principal was 100% so happy and supportive. She is no stranger to the world of adoption and was on my journey with me. I quickly set up my room, mapped out a few weeks and walked away.